By Alexandra Caspero on February 7, 2017
Jump to Recipe·Print Recipe 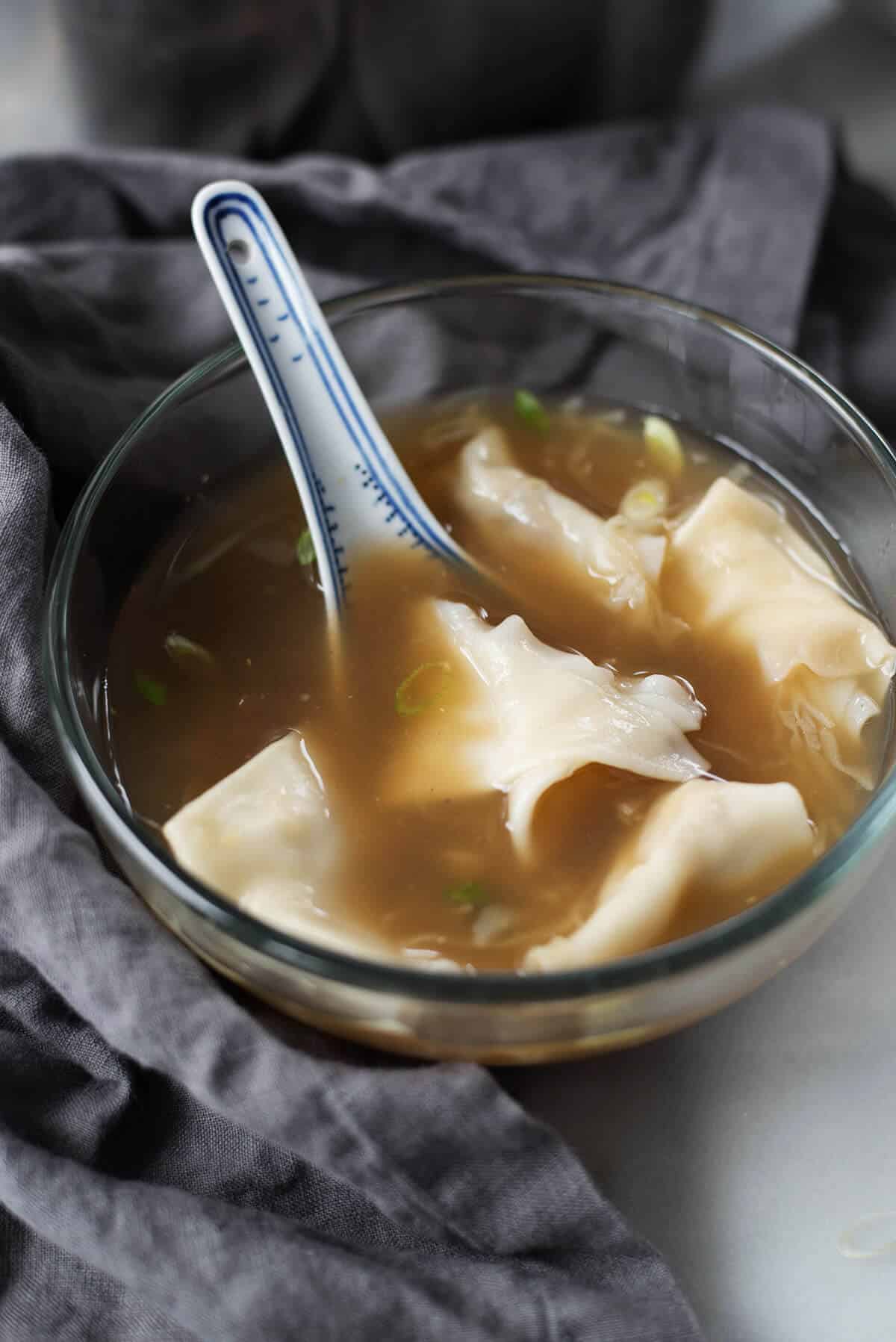 When you can’t find what you need, you make it yourself.

That’s my attitude about most vegetarian items. Since it’s hard to find them on certain menus, I turn to my own kitchen for the foods I’m craving.

That’s how a felt a few weeks ago, sick as a dog from a cold that I couldn’t shake and craving wonton soup. As a child, I swear my illnesses were cured from a giant vat of wonton soup, that my mom would order from our local Chinese shop. While I know that soup didn’t contain magical powers, try telling that to my 9-year-old brain. Sick –> wonton soup –> much better. 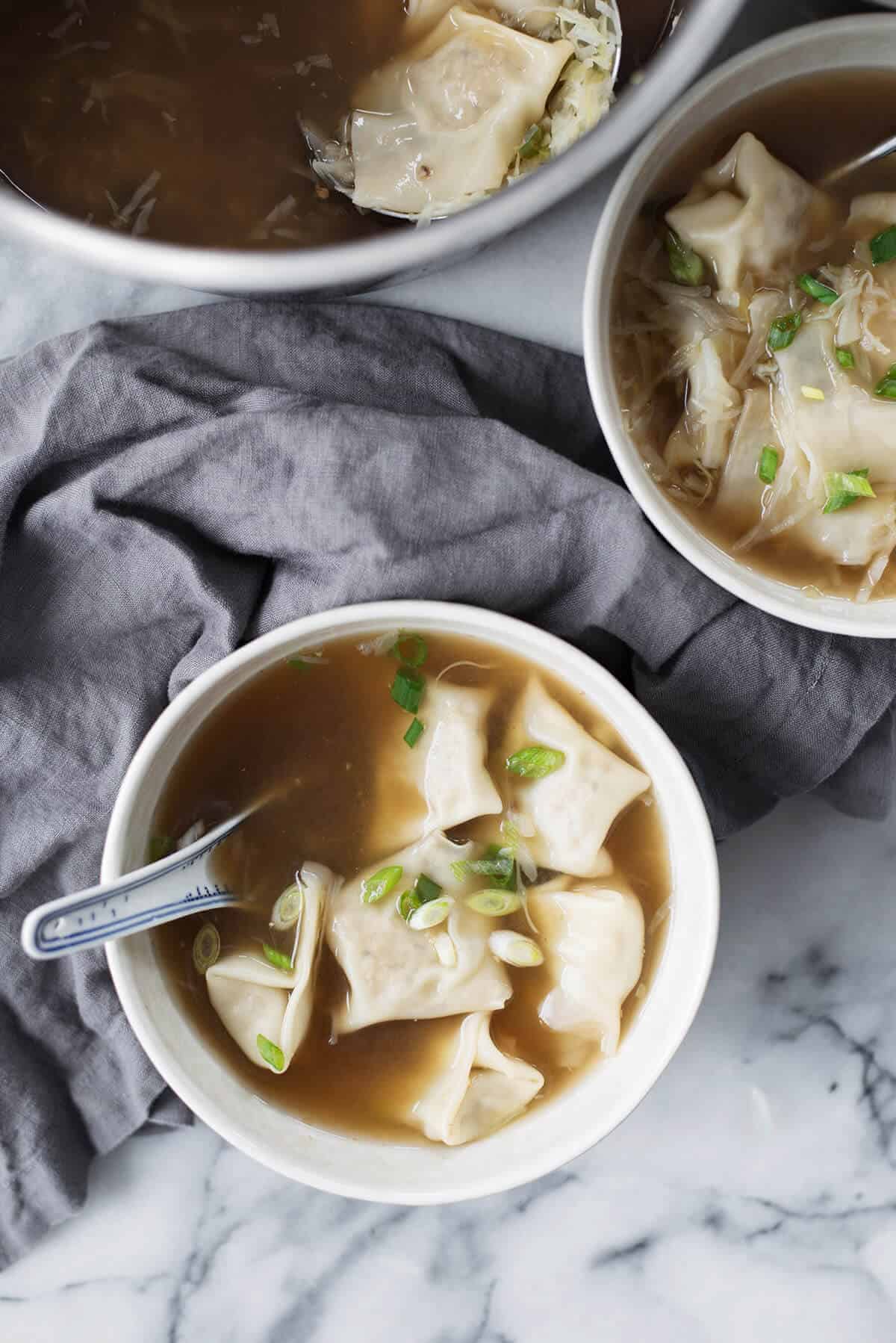 So, I did what I do best. Dragged myself to the store, bought a handful of ingredients and got to work. Even in my sick state, I couldn’t shake the incredible urge to slurp down chewy wontons in a yummy broth.

The greatest part about this recipe is that it’s not terribly difficult to create. Yes, you’re making homemade wontons so some time is involved, but it’s easier than it looks.  Put on a TV show or a podcast (can’t get enough of Pod Save America right now) and get to work. 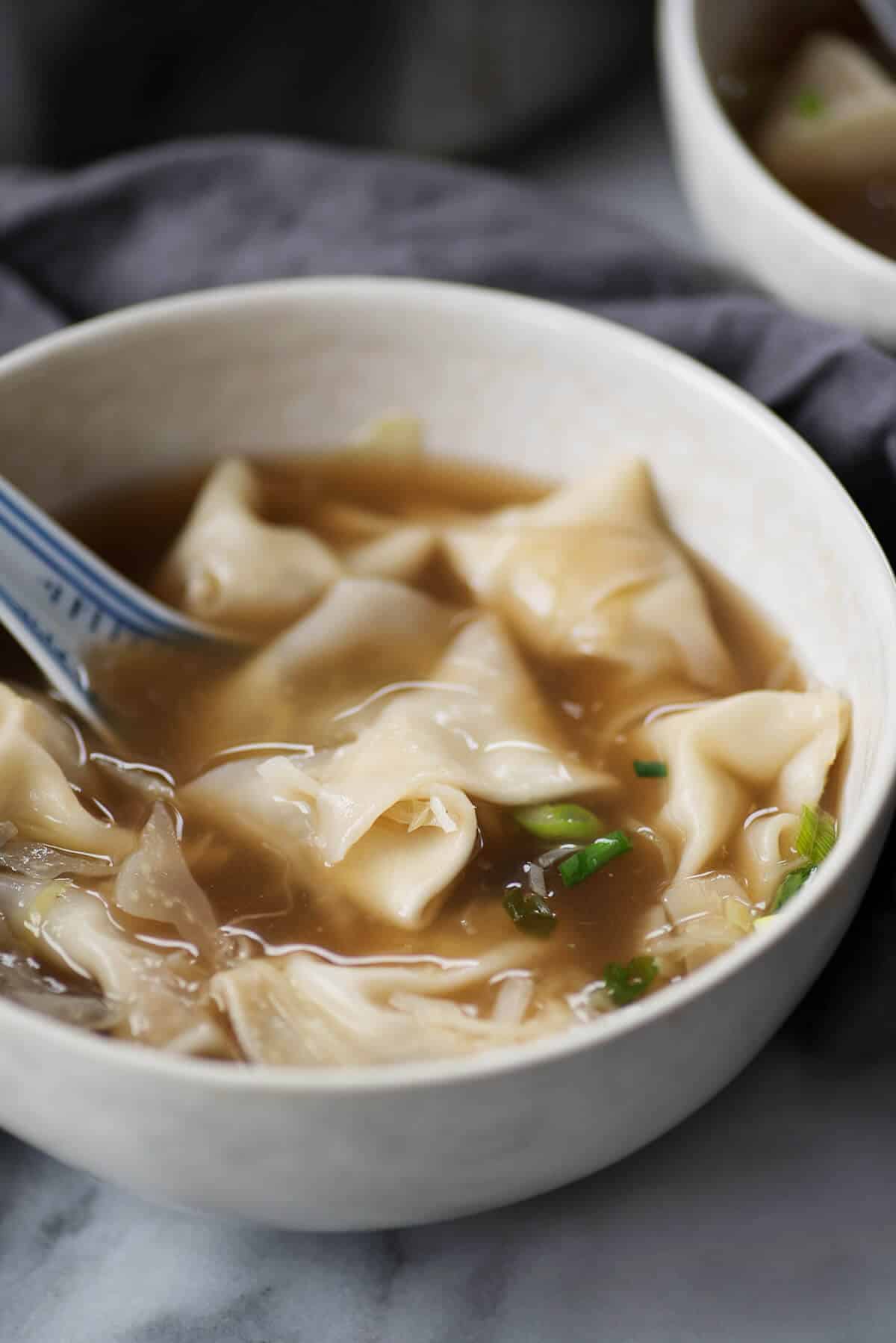 Once you make the wontons, you’re ready for the soup! I cheat and use Pacific Foods mushroom broth because it’s incredibly flavorful and easy. But, if you’re really going to go for it, a homemade mushroom broth would be amazing here. (I’ve got a killer recipe in my cookbook)

Since the wontons get soggy after cooking, freeze whatever you uncooked portions you don’t need. Place the prepared wontons in a single layer on a cookie sheet and freeze. Then, place the wontons in a plastic bag until ready to use. When you need wonton soup on the fly, heat up some broth and drop them in. 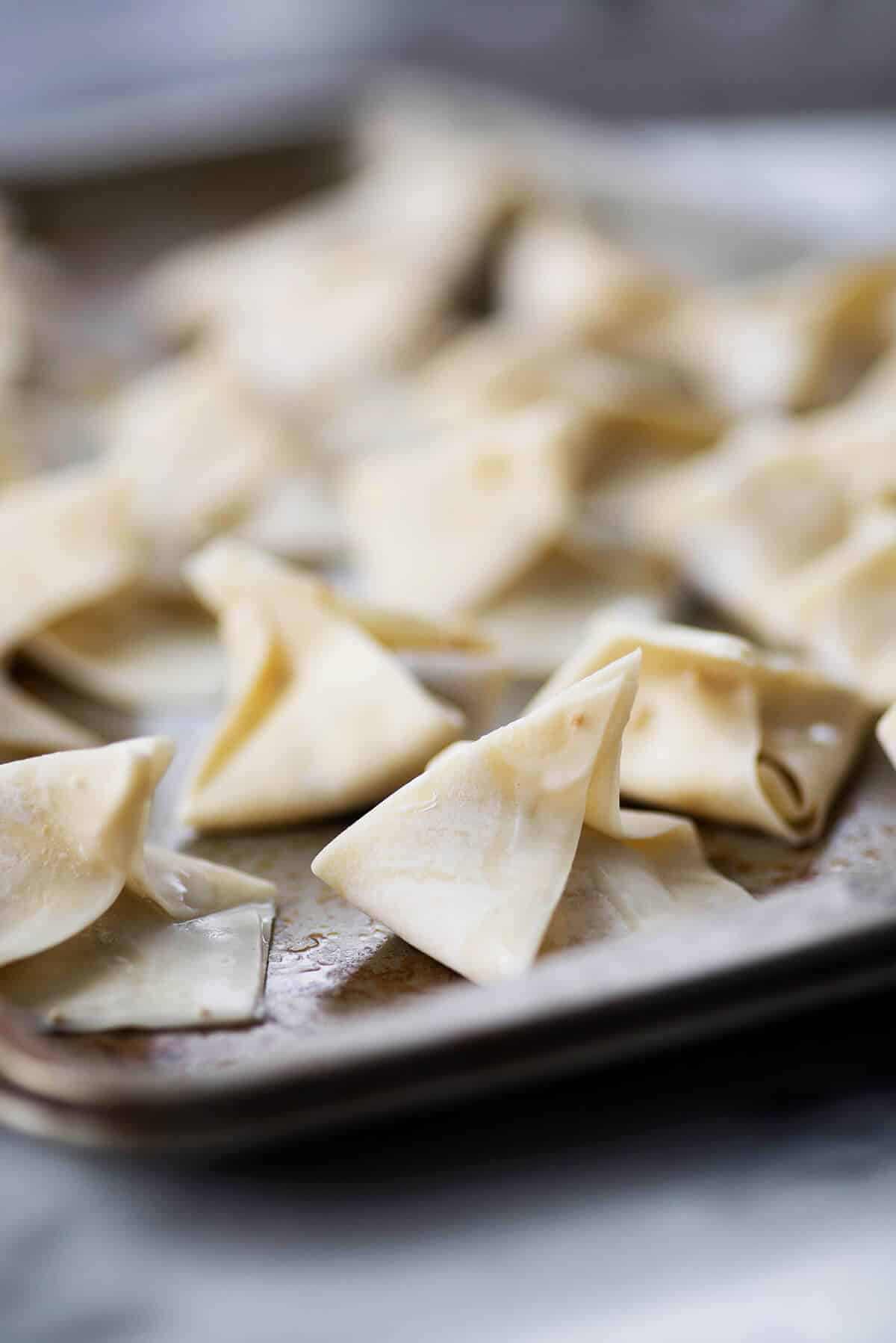 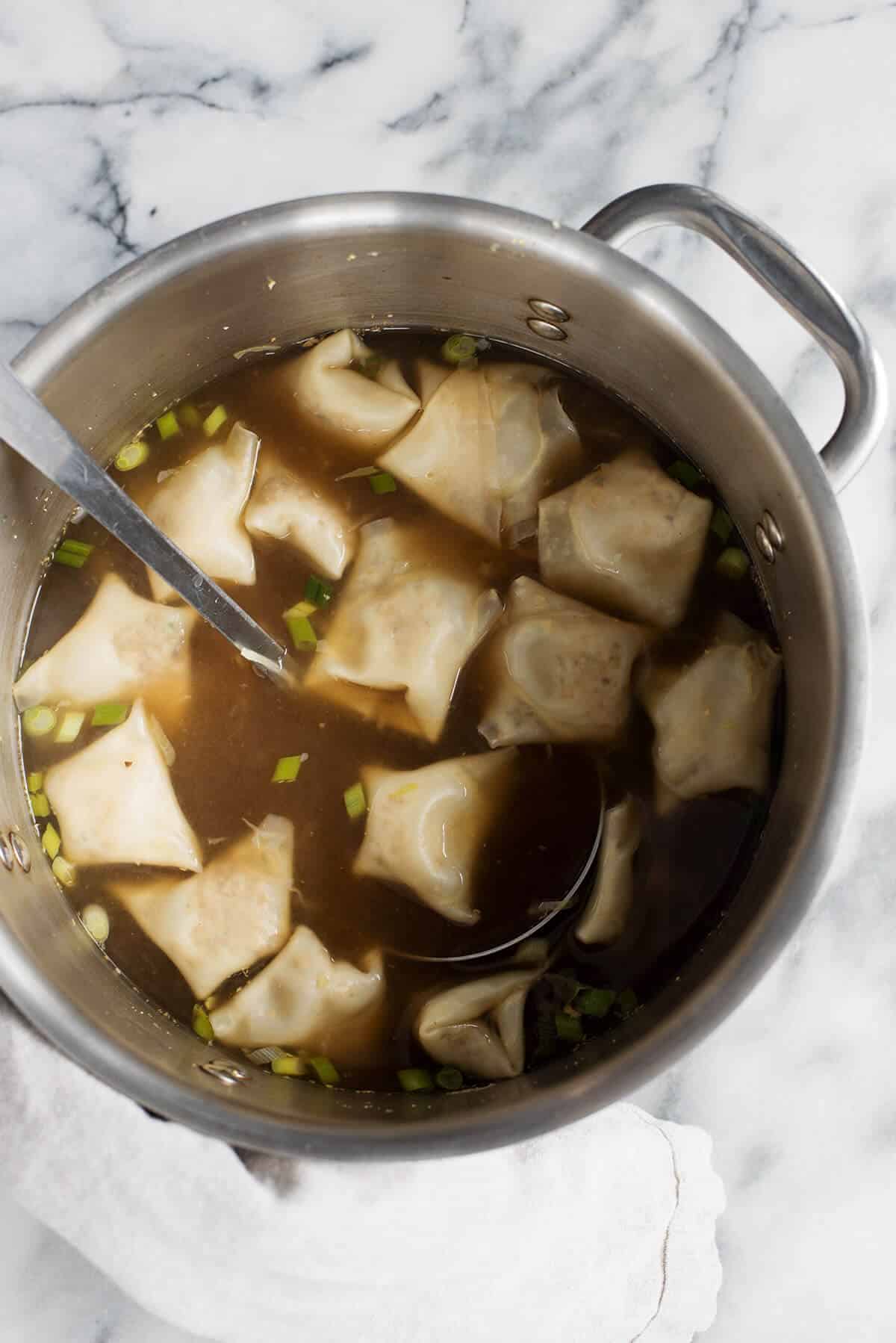 While this soup doesn’t contain any dairy or egg components, if you want a vegan version, make sure to purchase vegan egg roll wrappers. You can find them in specialty/Asian markets and online.

Mushroom Wonton Soup! Homemade wontons with mushrooms and tofu served in a rich mushroom broth. A vegetarian and vegan must!