Hi friends! Last month I had the pleasure of attending the annual Food and Nutrition Expo and Conference (FNCE) in Philadelphia. FNCE is the annual dietetics conference and in addition to the best-of-the-best education sessions covering all areas of nutrition, it’s also a huge food party.

Companies, both established and new, come together to share their offerings and we RD’s get a glimpse of food trends and items to be on the lookout for. Think of it as Expo West, but just for dietitians. In addition to getting a sneak peak/closer look at some of my favorite food companies, FNCE also boasts 4 days of research-packed education sessions- which I’ll share some highlights from in a bit. 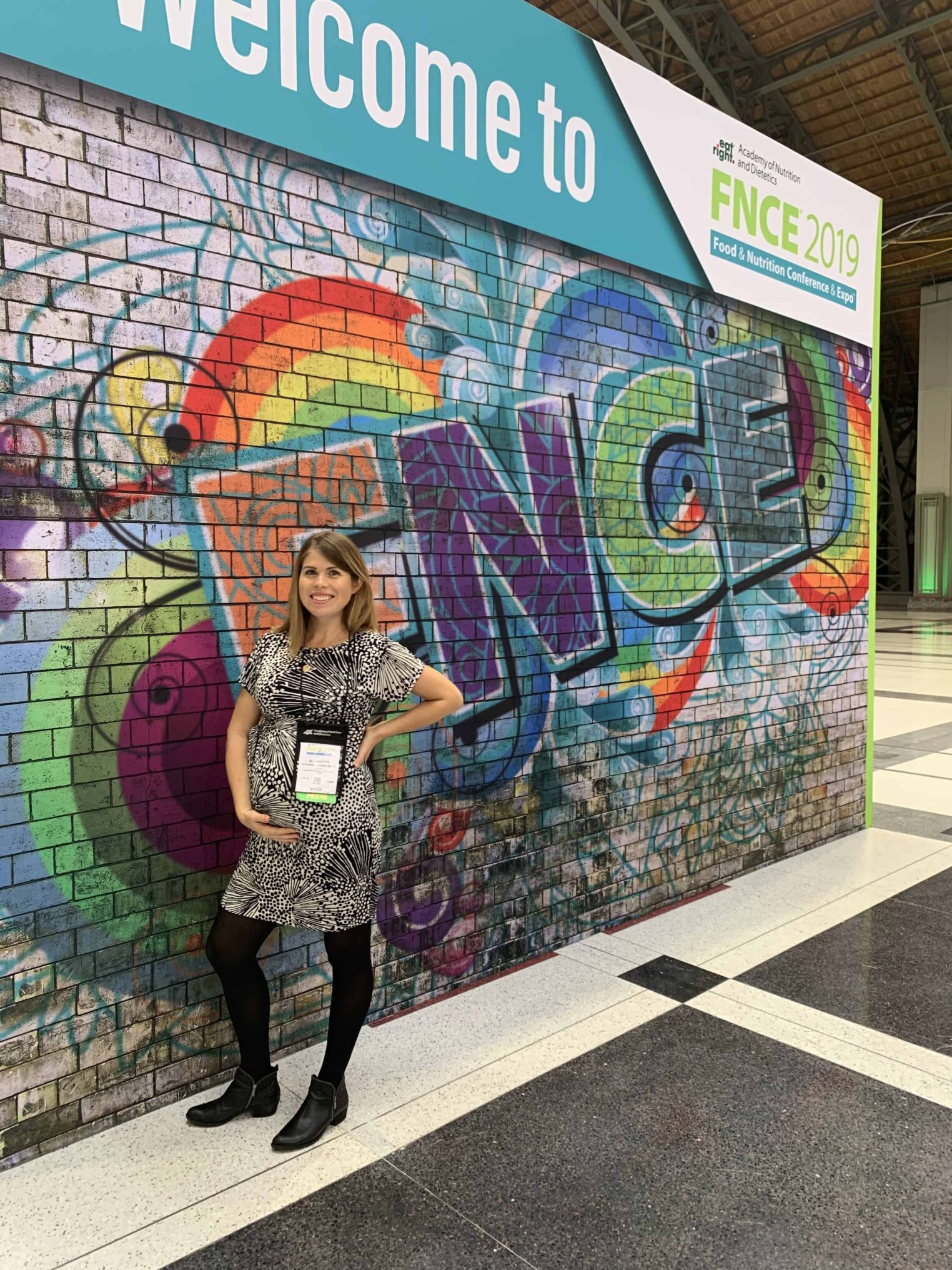 As expected, Plant-Based/Plant-Forward eating is not going anywhere, especially if the companies at FNCE are to be believed. While I think RD’s as a whole are more reluctant to promote a plant-based diet, it makes my heart so happy to see more and more offerings from popular food companies. I still remember the days when my meatless options at the grocery store included Boca Burgers, Morning Star farms and…. that’s about it. The fact that even my small grocery stores in St. Louis now have a dedicated section to plant-based foods is nothing short of progress and where this continued trend is going.

I lost count at how many dairy-free offerings there were at the EXPO hall, in addition to new products made from on pea protein and chickpeas. The great thing about a dietetics conference is that in addition to all of the packaged plant-based items, there is a huge focus on commodities: California Strawberries, Tomato Wellness, Wild Blueberries were all there and the Produce for a Better Health Foundation had a fun booth encouraging everyone to simply eat more plants, with the new rollout of their Have a Plant messaging.

This is it for me. I’m so tired of the elitist messaging that sometimes comes with plant-based eating; the truth is that we all need to eat more produce as only 1 in 10 Americans currently get enough. Conversations around price point and access are important and I firmly believe in meeting people where they are. Remember that all forms of produce matter, and having more is a simple message that every dietitian can get behind.

In response to the rise in plant-based eating, there also seemed to be an increased focus on products that were grain free. Honestly, I don’t get this trend. The research around whole-grains has been linked to everything from reduced risk of cardiovascular disease, certain cancers, diabetes, gestational diabetes and more. Cutting out grains sends the opposite message of health, and it’s curious that this trend seems to also be on the rise.

Cauliflower has been the “it” vegetable for the past few FNCEs, and I don’t see its popularity waning any time soon. Ironically, I suppose the only benefit to reducing grains is that many companies are swapping in more plant-foods instead. Cauliflower showed up in breads, in pizza crusts and as a breading for chicken nuggets.

There was also a big focus on “prebiotics” in addition to probiotics. Prebiotics are naturally found in certain fibers in plant-foods, yet another reason to increase plant-based foods and not reduce consumption of healthy, whole-grains. At this point, I’m more focused on getting prebiotics from foods and not from supplements.

Whitney, my Plant-Based Junior’s partner, and I hosted a fun lunch with Silver Hills Sprouted Bakery and Little Northern Bakehouse on Sunday. We wanted to help further educate dietitians on the health benefits of sprouted grains, and introduce them to our two favorite brands: Silver Hills Bakery which focuses on traditional sprouted wheat breads and Little Northern Bakehouse, which focuses on gluten-free breads and other baked goods.

If you aren’t familiar, the health benefits of sprouted grains can be summarized by the acronym “DNA”, which stands for digestibility, nutrition and absorbability.

When a grain is sprouted it is metabolically reactivated, which means that the enzymes that break down protein and starch are elevated. This results in higher amount of soluble fiber and less gluten. While gluten isn’t a problem for the general population, many people find that sprouted grains are easier to digest. This enzymatic activity also increases absorption which makes the nutrients in sprouted grains more bioavailable.

Sprouting also increases the content of iron, folate, zinc and antioxidants. This is one of my favorite reasons for eating sprouted grain products, and why I eat them and serve them often to my little babe. You can learn more about Silver Hills Bakery’s sprouting process and products on their website.

If you are gluten-free, you’ll want to try Little Northern Bakehouse’s gluten-free breads. My favorite product in their line is the Sprouted Honey Oat which tastes amazing, is completely gluten-free and contains the same benefits of sprouted wheat– without the wheat!

I learned a ton from the educational sessions, and wanted to share a few highlights that I thought would be of most benefit to you. One of the presentations was on Modern Wheat, which I thought was timely considering our presentation on sprouted grains and the general confusion related to grains.

To clarify, GMO wheat is not commercially available in the U.S. While the non-GMO label is often used on wheat products, this is mostly done because the general public doesn’t know this and in case of other GMO containing ingredients. Additionally, wheat supplies 20% of the world’s protein intake. That may not be a surprise to my plant-based eaters, but a point that’s always good to be reminded of: whole-grains, including wheat, are a good source of protein.

Is it gluten…. or something else? Having worked with many clients over the years trying to determine if they are gluten-sensitive, I know how challenging the process can be. While the problem may be gluten, there are other components of wheat that can cause adverse reactions in some individuals. For example, some may be reacting to the fructans in wheat instead of the gluten proteins. If you’re interested in learning more, here is an overview paper from one of the presenters.

I attended a really great session on toxins and I thought there was several great takeaways for all of us. First, we cannot get rid of toxins. They are everywhere and it’s a fool’s errand to try and do so. However, there are simple steps that we can take to help reduce our exposure.

As an official definition, there are several types of “toxins”: pollutants, endocrine disruptors, obesogens, neurotoxicants and toxicants. While our body does a really great job of breaking down and eliminating these exposures (thank you kidneys, lung and liver!), it doesn’t hurt to work on reducing exposure, especially in vulnerable populations like children, pregnant women and the elderly.

Step one: support organs of detoxification. That means eating an overall healthy diet that nourishes the body and provides all of the essential micronutrients. High stress levels, low activity levels and poor sleep can all lead to decreased function of our detoxifying organs. This also means washing produce to remove as many pesticide residues as possible, reducing exposure to glyphosate (especially for home gardeners) and limiting high mercury fish and higher fat dairy. Why dairy? Well, full-fat dairy contains higher levels of persistent organic pollutants, which accumulate in fat.

In addition, reducing intake of processed meats, refined sugars which can tax the liver and alcohol/caffeine can all help. This works by not only reducing stress on the body and our organs but also reducing exposure to potentially dangerous chemicals. As I’ve talked about before, processed meats are considered carcinogenic and many processed foods contain chemicals like BHT, BPA and polysorbate.

I’m not Goop. I live in the real world as well and don’t believe in fear-messaging around food. That being said, I think that these are good messages for all of us that capture not only potential risks related to excess environmental toxin exposure but also overall health. To me, it all comes back to the same thing: eat more plants, eat less meat/dairy and reduce excess consumption of sugar and processed foods.

Honestly, some of the best moments of FNCE for me are catching up with friends. There are a group of roughly 10 dietitians that I only get to see at FNCE each year, and it’s one of the reasons that I get so excited to go! These women are some of my greatest friends, even if we only see each other once a year. We text constantly, are always giving/asking for advice and it’s been fun to watch us as newbie RD’s to now owning businesses, getting married and having babies.

Lastly- the highlight of the trip was dinner at Vedge. Wonderful Pistachios invited a few dietitians from their Plant-Based Nutrition Leadership group to enjoy a special meal at Vedge. I’ll be honest, the moment I found out FNCE was going to be in Philly this year, I had my eye set on snagging a reservation at Vedge. It did NOT disappoint. The rutabaga fondue and the wood-fired carrot might have been two of the best dishes I’ve eaten in a while. Highly recommend if you are in the area.