By Alexandra Caspero on November 2, 2020
Vegan Pumpkin Bolognese ! The BEST vegan bolognese with mushrooms and a creamy pumpkin dairy-free sauce. A must for fall and winter.
Serves 4
Jump to Recipe·Print Recipe

Vegan Pumpkin Bolognese ! The BEST vegan bolognese with mushrooms and a creamy pumpkin dairy-free sauce. A must for fall and winter. 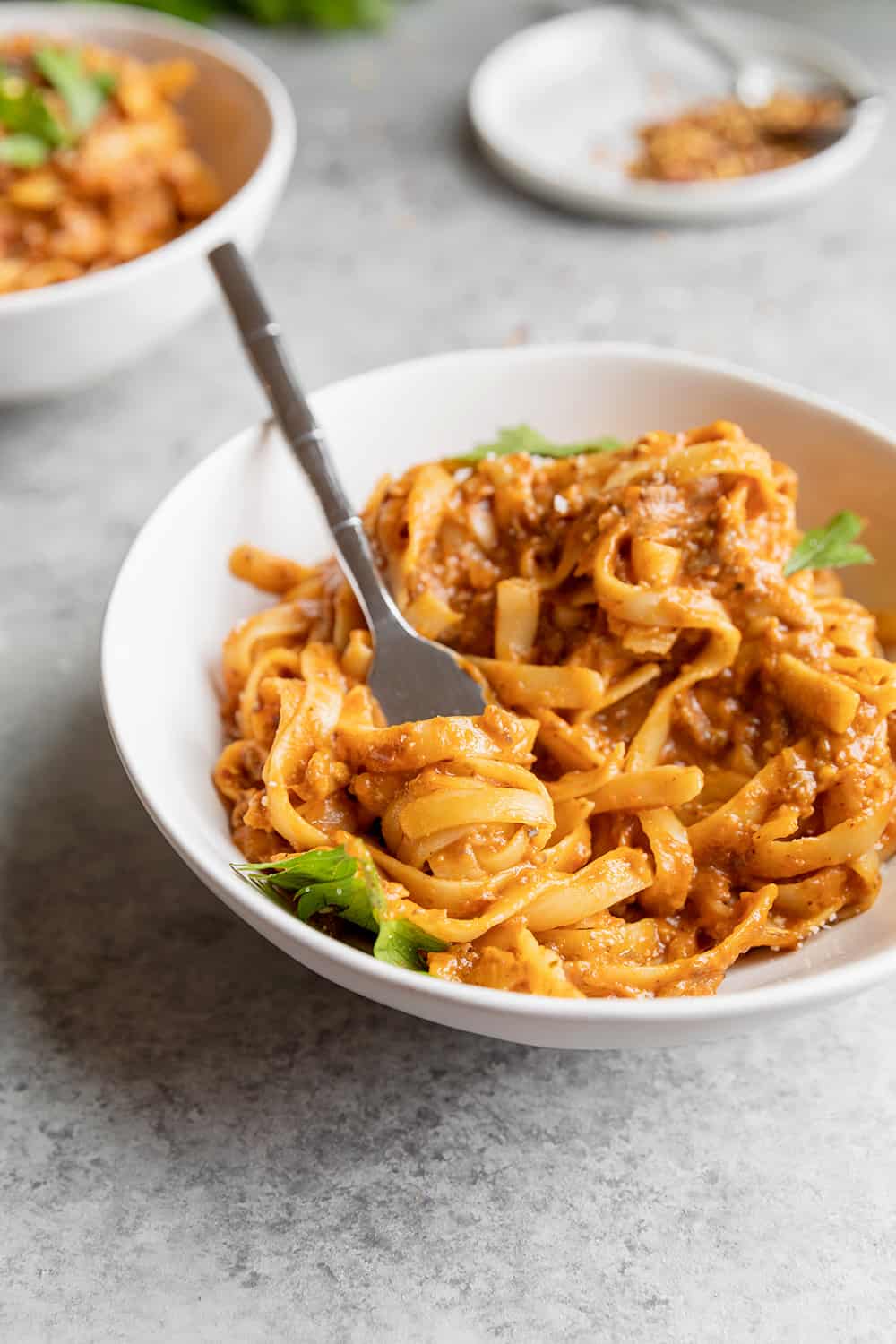 Coming at you with perhaps my favorite new pasta recipe– vegan pumpkin bolognese! I know, it perhaps doesn’t sound very intriguing but here’s what we’ve got: tender mushrooms cooked until they are very browned and very meaty, then covered in a rich pumpkin tomato sauce and tossed with fettuccine.

It’s hearty, delicious and the perfect amount of new and different. If you like my eggplant bolognese sauce and if you like pasta, then you’ll love this fun fall combo. 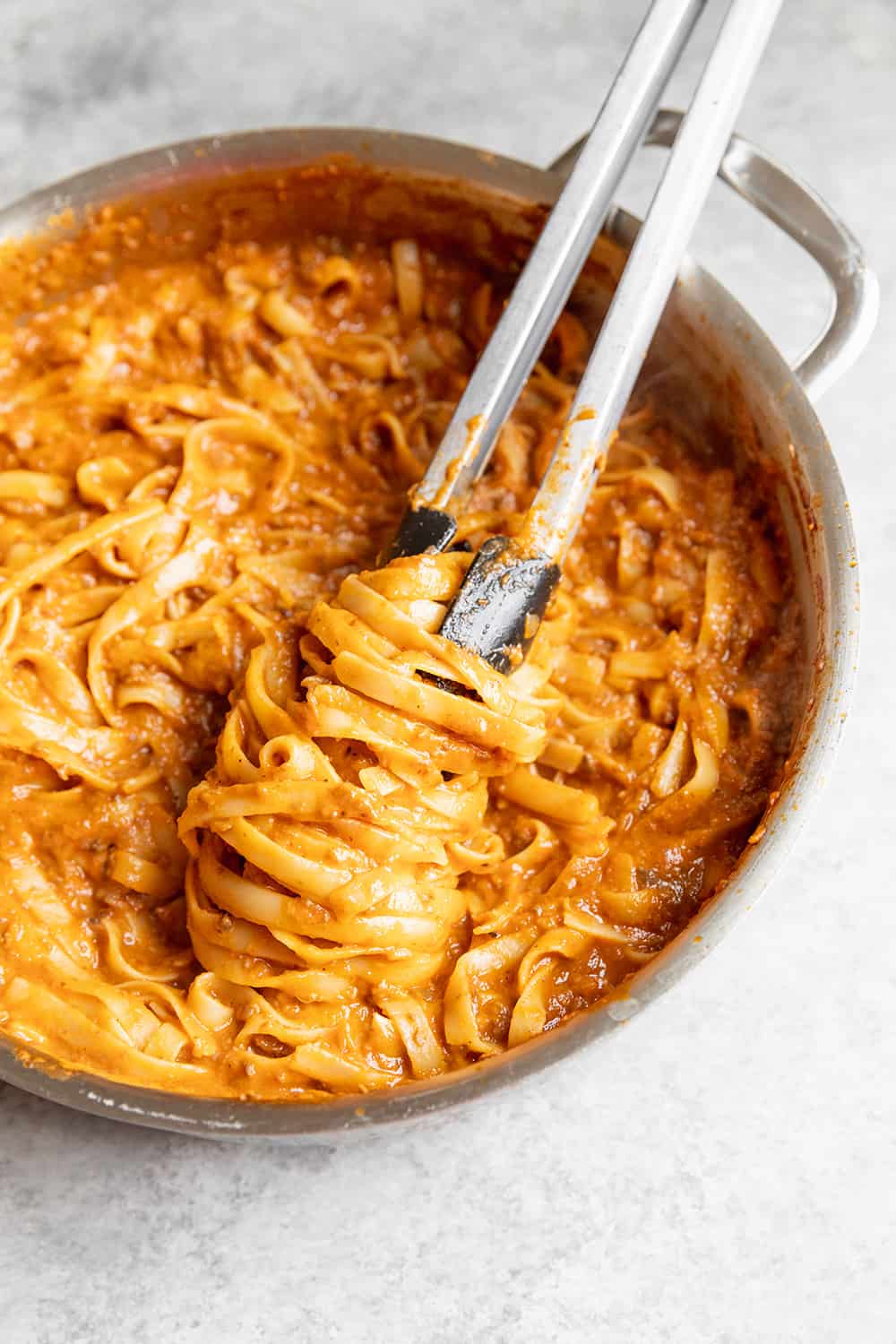 As with all good recipes, I was inspired by this pumpkin spaghetti recipe while browsing through Pinterest one night. I loved the idea of making a hearty sauce from sun-dried tomatoes, pumpkin and tomato sauce and thought it would be perfect over a simple bolognese mushrooms base.

I’ve been doing this mushroom sauce a lot lately; it’s so incredibly meaty and I find it much more texturally similar to a traditional meat bolognese than using lentils. The secret is pulsing the mushrooms in a food processor first so they are very finely diced, then cooking them until well-browned and reduced. 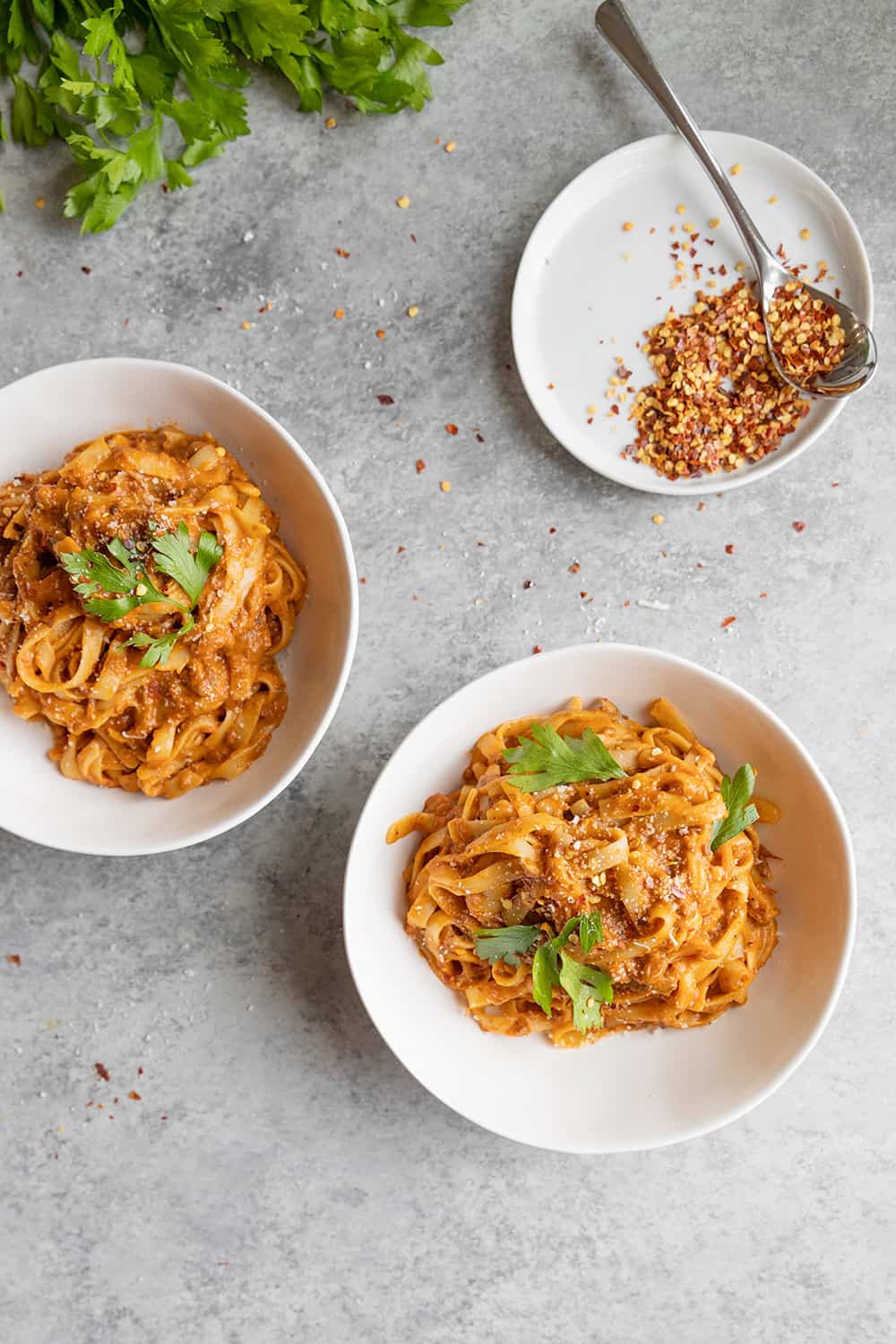 Don’t rush the mushrooms– you want them to cook until all of their liquid has been released. If you stop cooking them too soon, they will steam instead of brown.

After that, you’ll deglaze the pan with soy sauce, scraping up all of the browned bits. You can use tamari if you are gluten-free, but the soy combined with the browned mushrooms adds SO much umami, not to mention the savory notes from the canned tomatoes and sun-dried tomatoes. 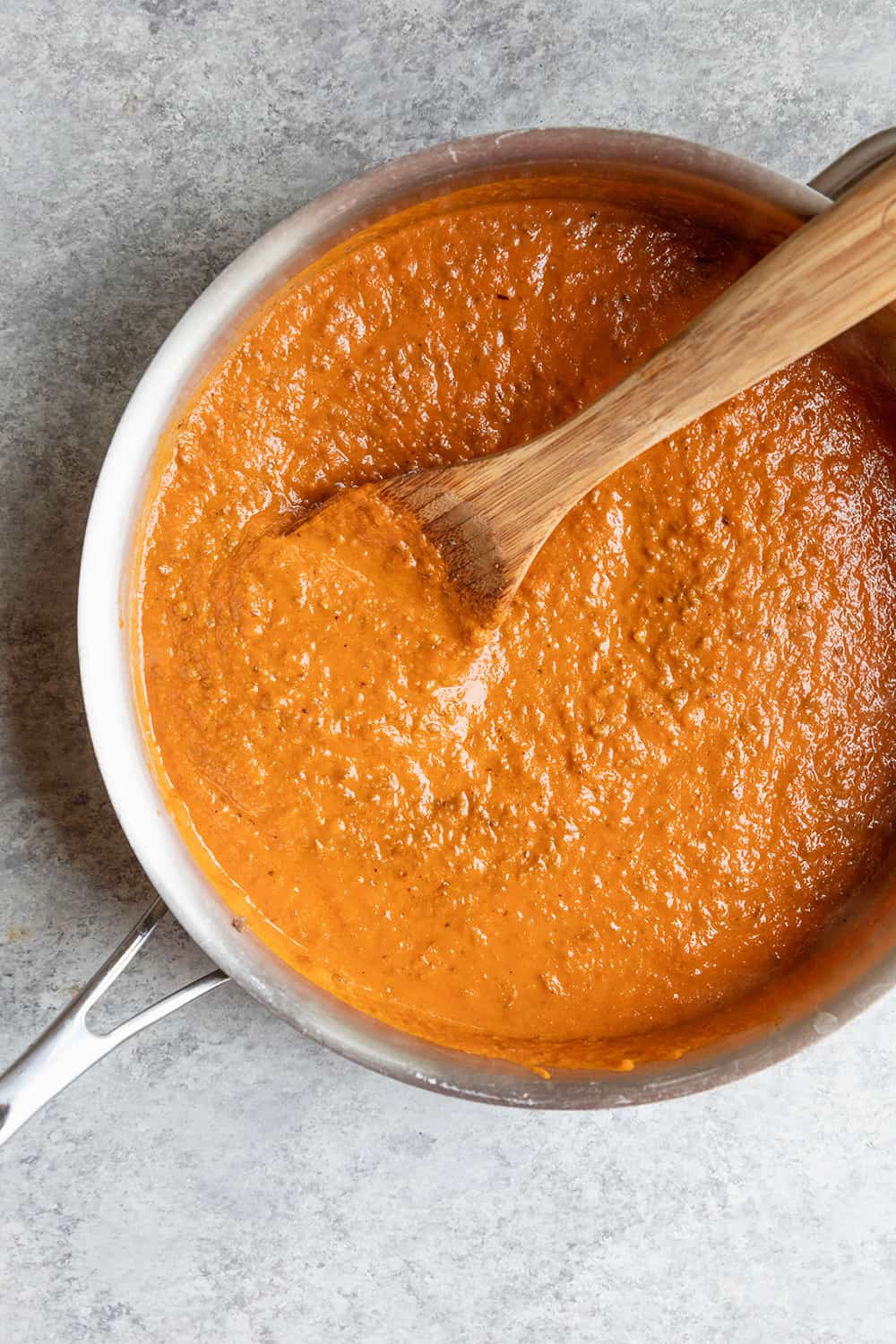 You’ll simmer the ingredients for the sauce while the mushrooms are cooking, then puree with a blender or immersion blender. I use my blender as I don’t have an immersion blender, but I’ll be honest and say that I’m thisclose to grabbing one for myself for the holidays.

Do you have one? Is it worth it? I used to think it was such a lazy appliance (just use the blender!) but there have been so many times over the last few months where I’ve thought– shoot, I really wish I had an immersion blender right now. 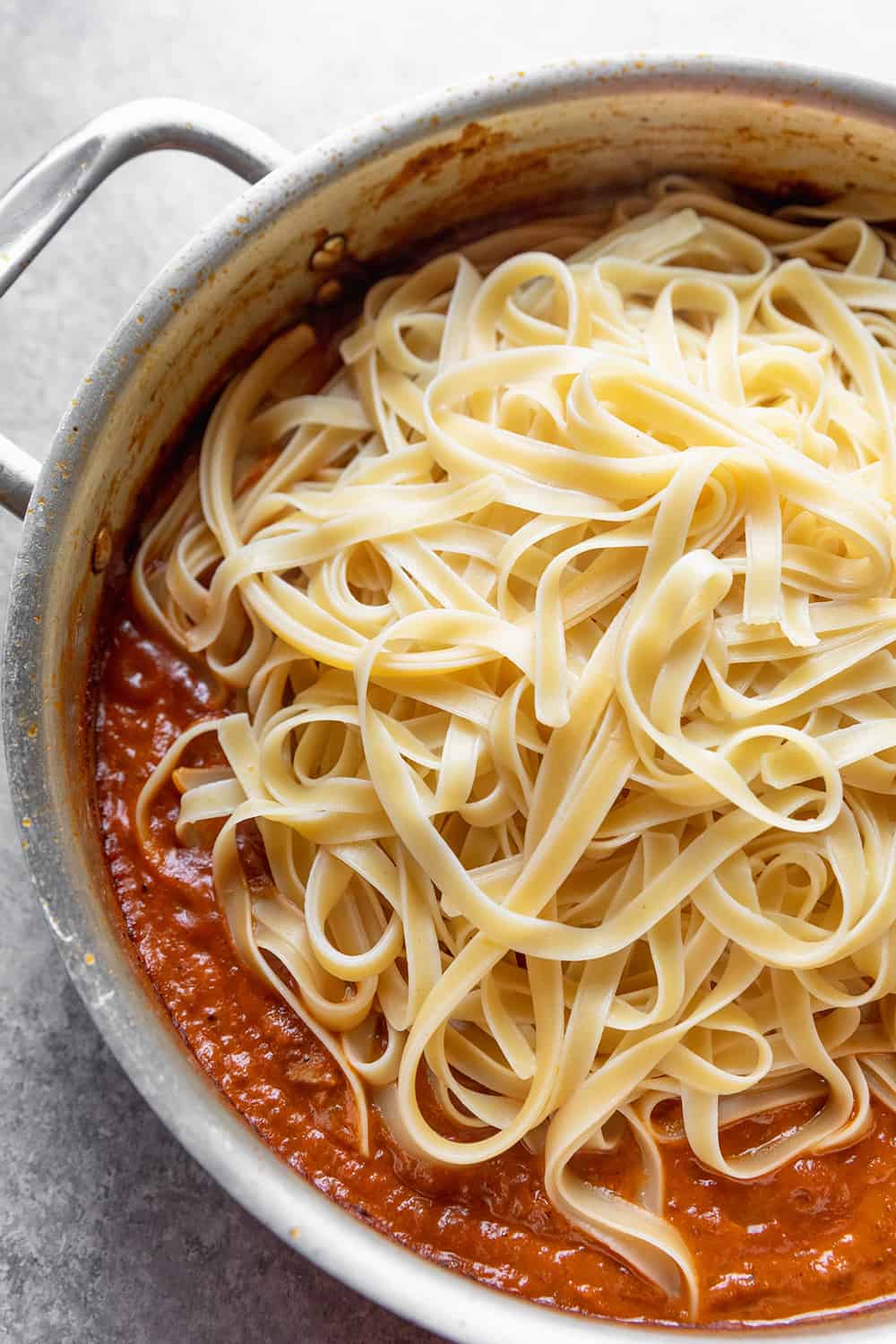 You know the drill after you make the sauce. Undercook the fettuccine slightly, then toss to finish cooking in the same skillet as the warmed sauce. I’ve written about this so many times, but it really does make a difference when it comes to the finished product, especially in a fettuccine dish like this vegan pumpkin bolognese.

Cooking pasta like this means silky, perfectly coated, saucy strands. Do it!

One last note– I’m calling for some type of creamer here to balance the acidity of the tomatoes. I was going to make a cashew cream, but since you only need three tablespoons of cream– it felt like a lot of effort to blend up that small of an amount. Therefore, I just used a little non-dairy creamer that I had in the fridge.

If you’ve got some, use that. If you don’t have any, then you don’t need it specifically for this recipe. A thicker plant-based milk, like an oat milk, will also work. Just make sure it’s unsweetened! I can’t tell you how many times I’ve made vanilla mac n’ cheese because I’ve grabbed the wrong carton… 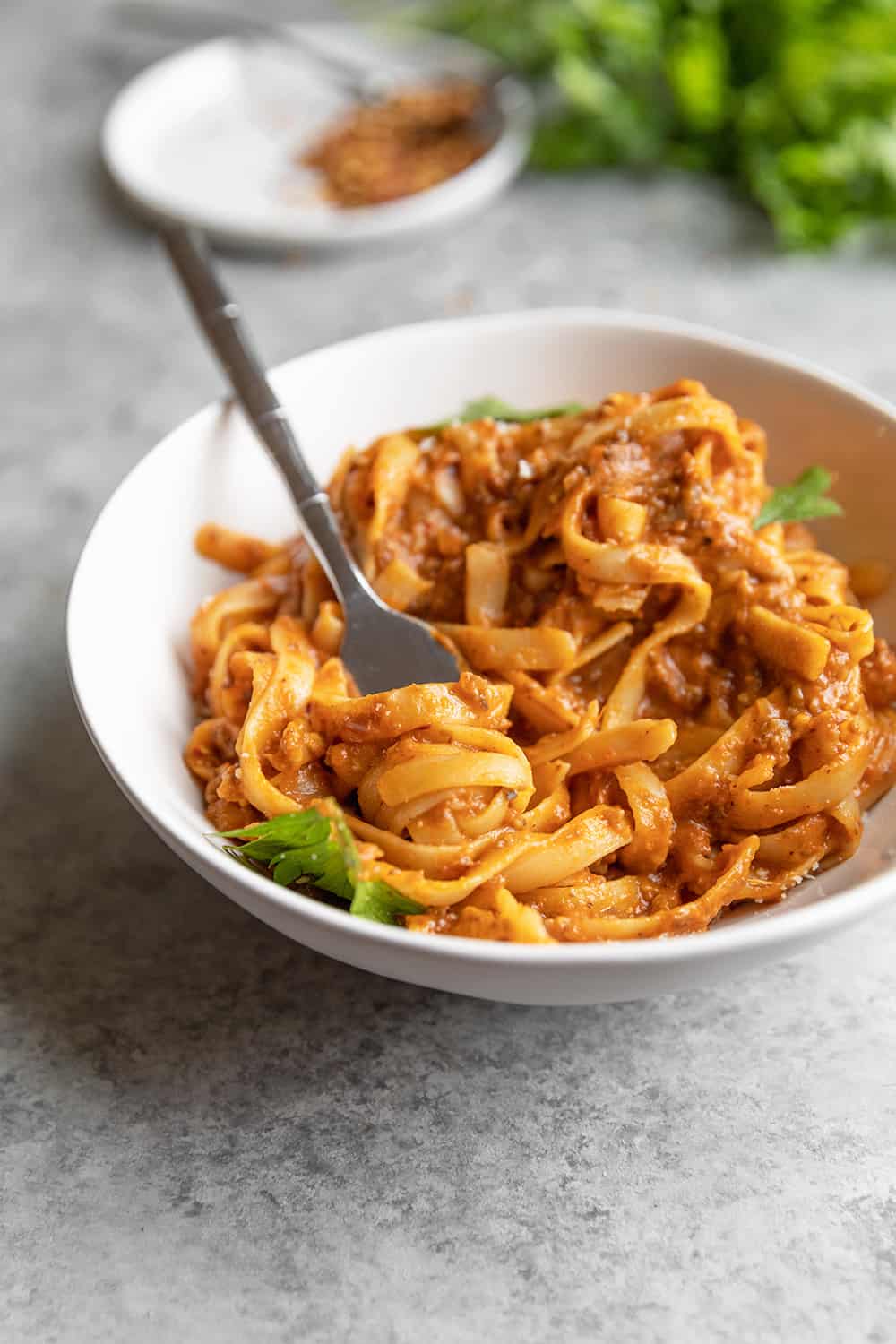 Hope you enjoy this vegan pumpkin bolognese as much as we do! If you try it, make sure to come back, leave a comment and rate it. Your feedback helps others and seeing you make my recipes makes my day! 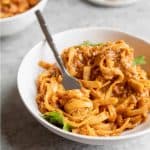 Vegan Pumpkin Bolognese ! The BEST vegan bolognese with mushrooms and a creamy pumpkin dairy-free sauce. A must for fall and winter.

*Any creamy milk will work here– you can also use soy milk in a pinch though you’ll get more body with a thicker milk like a non-dairy creamer or cashew cream.