“Something is missing.” That’s the typical response I get from non-vegan friends and family when I ask them about vegan food. It’s good, no one is denying that, but it’s usually missing something.

I used to roll my eyes when I heard this. Can’t you just enjoy one meal without meat? It felt so simple to me and I thought that the missing ingredient was mostly in their head.

Then I started developing my own recipes and realized that they weren’t crazy or just obsessed with bacon. Something was missing when you remove the meat and cheese. That something is umami. To  create delicious vegan recipes, you have to understand plant-based umami. 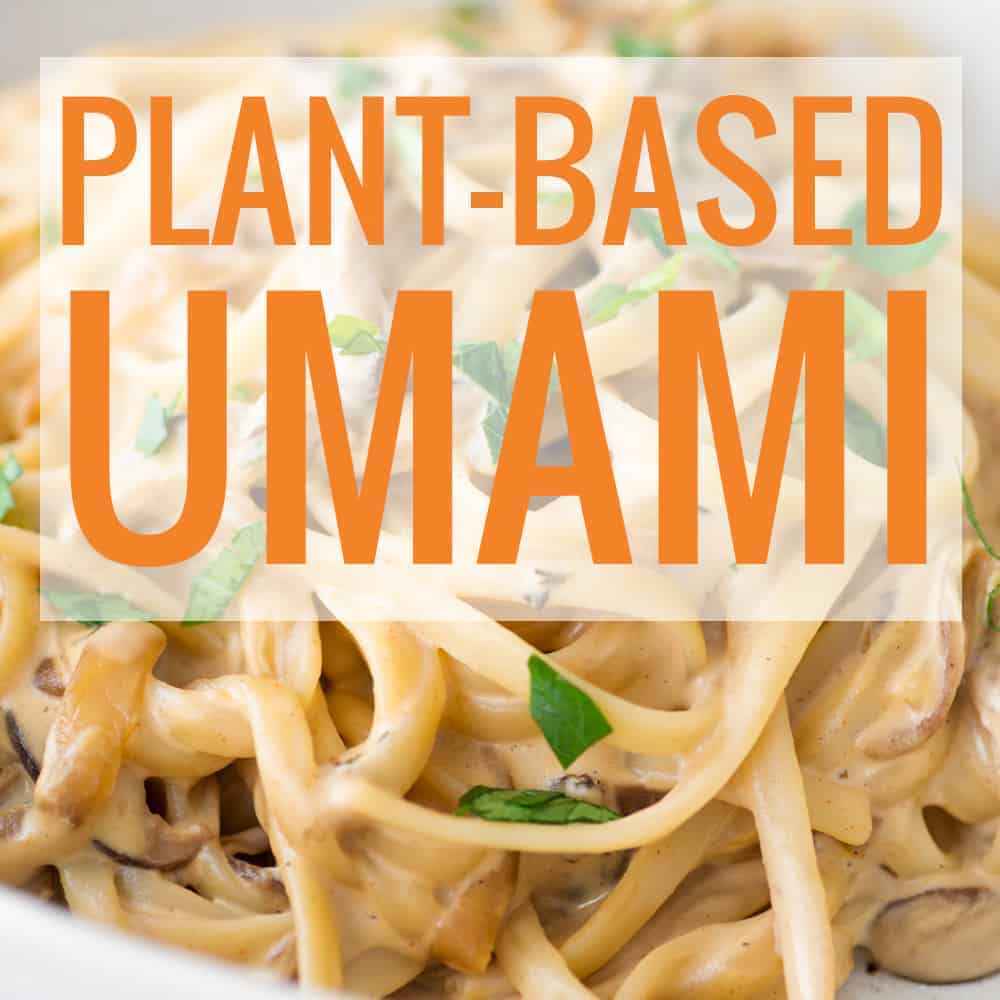 Umami is our 5th taste receptor, after sweet, sour, bitter and salty. Essentially, umami is the meaty flavor of food, it spreads across the tongue to coat it and lingers in the mouth longer than other flavors. It also promotes salivation, which helps you taste and enjoy food more. It’s why umami is referred to as a flavor bomb. Without it, food does feel like something is missing.

Umami is found in foods that contain a high level of glutamate, a naturally occurring amino acid. Many of these foods are animal products like meat, aged meat and cheeses. Plant-based sources include tomatoes, mushrooms, miso paste, seaweed, green tea and more. Awesome plant-based recipes understand that in order to have that unmistakable savory factor, some type of umami needs to be present.

Glutamate is the Key

When we eat any food, our taste perception begins on the tongue with it’s ability to pick up tastes of sweet, salty, sour, bitter and umami through specific taste receptors. This information is then sent to the brain to process and allows us to recognize the taste of the food that we eat.

Glutamate, an amino acid, is one of the predominant ingredients that triggers the umami taste receptors. (Others include the ribonucleotides inosinate and guanylate.)

Our bodies are incredibly smart and certain tastes trigger specific physiological needs. Salty foods, for example, suggest foods contain electrolytes and minerals. Bitter foods can indicate whether a food is potentially harmful. Umami flavors then suggests the presence of amino acids and proteins in goods. Once we taste umami, saliva flow increases and tells our brain that we are likely eating a protein and to increase protein enzyme production.

We experience umami with the umami-eliciting substances glutamate, inosinate and guanylate — or a combination of both.

Why does this matter? Because combining the ingredients together is what makes umami flavor explode! For example, just using kombu in a broth elicits umami flavor but combining both kombu (glutamate) and dried mushrooms (guanylate) is what really makes for incredible umami flavor. It’s called umami synergy. Adding glutamate + guanylate or glutamate + inosinate creates much more umami than just one of these on it’s own.

An important note, especially for plant-based foodies. Aging and ripening increase the amount of glutamate in foods. For example, when tomatoes are fully ripened (hello ruby red tomatoes), the level of glutamate has peaked. It’s just one of the reasons a ripe tomato tastes better than an unripe one. Similarly, dried mushrooms contain more umami than fresh mushrooms.

Fermentation also increases the amount of glutamate in foods. Miso, soy sauce and beer are more plant-based sources of umami.

Ah, MSG. That much-confused additive. For most of us, MSG and other ‘food additives’ are four-letter words. Items that we don’t want anywhere near our food. I’ll admit that I didn’t know much about MSG until recently. It wasn’t an ingredient that my mother ever cooked with and I regarded it as a food additive that, if given the choice, I didn’t want in my food.

When I became interested in how umami shapes plant-based food, I became curious on the science behind MSG. And what I found was shocking.

In the US, the average person consumes about 11 grams of glutamate daily from food sources and less than 1 gram of glutamate from MSG. In other Asian countries, MSG intake averages closer to 3 grams per day. To put that in perspective, 1 gram of MSG has the same glutamate level as 1 to 1.5 ounces of parmesan cheese.

Nerd out with me for a quick moment. Glutamate, the amino acid that is widely present in foods and our bodies, is the key to umami sensation. Glutamate then exists in two forms: protein bound and free glutamate, which is not bound to proteins.

Within foods in liquid form, free glutamate binds together with ions like sodium, calcium and magnesium. MSG then is one molecule of sodium bound with one molecule of glutamate. That’s it! We’ve all been technically eating MSG, we just likely didn’t know it.

Working backwards then, to create MSG you ferment a sugar source (in Asia, it’s sugar cane and in the US it’s corn) to create a glutamic acid. A sodium ion is then added to make it crystalline and stable. When MSG is then added to liquids, the bond between the sodium and glutamate is broken to form free glutamate and sodium.

Wait, I thought MSG was bad for you.

I did too. Until I learned more about the origin story of ‘Chinese Restaurant Syndrome‘ and the complicated history of MSG and racism.

Remember that the glutamate in commercially-made MSG is the same substance that’s found in umami-rich foods like ripe tomatoes.

This is the good part. This is how you create an incredible vegan recipe that will not have anyone saying ‘something is missing’ afterwards. (PS- here’s a list of foods and their glutamate content.)

Layer the umami. Use fruits and vegetables in season as umami concentration reaches its peak with in-season produce. Add miso paste to sauces and use good soy sauce, where applicable, in place of salt.

If you’re making a soup, use a broth that was made from dried mushrooms or kombu, or from bouillon. One of my favorite brands is the vegetarian Better than Bouillon which contains yeast extract aka umami. Nutritional yeast, another source of umami, makes for a great parmesan cheese substitution.

Dried mushrooms (especially shiitakes and porcinis) have more umami than fresh ones, the same is true with tomatoes. Therefore, sun-dried tomatoes, dried mushrooms, tomato paste and ketchup are all delicious adds to recipes.